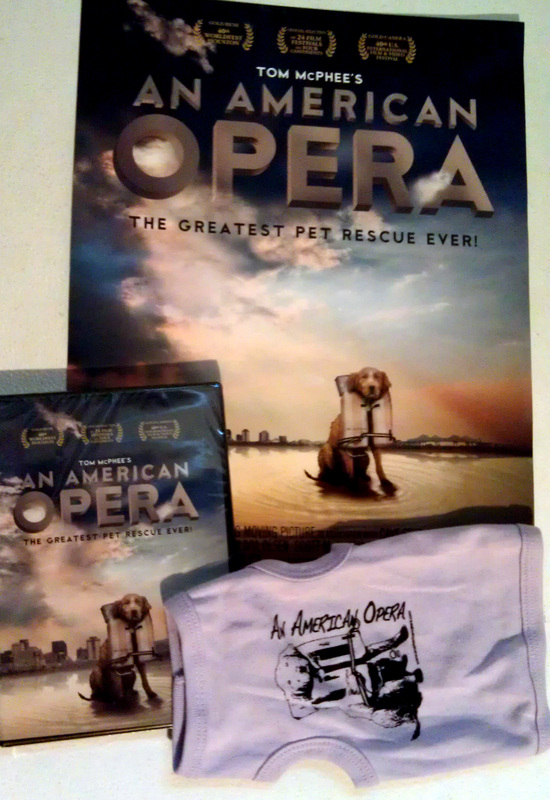 SKU:
$50.00
$50.00
Unavailable
per item
AN AMERICAN OPERA (AAO) is a visceral, operatic vision of what happened to the people of New Orleans who were forced to evacuate without their beloved pets and the volunteers who came from all over the world to help.  AAO has won 6 awards playing at more than 30 Film Festivals and is still playing to TV audiences around the world.

In the aftermath of Hurricane Katrina, America suffered the
worst domestic animal crisis in its history. Tens of thousands of animals were left to perish in neighborhoods all across the gulf when the owners were forced to evacuate without their house pets.

Follow the story deftly crafted by Director Tom McPhee, of the pets, vets, owners, officials,
rescuers and adopters of animals as they work through the chaos to do what is right only to discover not everyone is working toward the same goal!

Tom McPhee went to Gonzales, Louisiana not knowing how he would help, just knowing he
needed to help somehow. He volunteered at the Lamar Dixon Expo Center and found himself
spending the next four days taking more than five thousand pictures of some of the thousands
of house pets rescued from flooded New Orleans.

For the next 22 months Tom would continue to document this historic event as it unfolded,
trying to understand where it all went wrong and how one fearless woman got it right!

Reviews:
Perhaps the biggest legacy AN AMERICAN OPERA will leave is the need to make a difference it imparts to those who view it.  As I watched the film with my wife, we asked ourselves why we hadn’t gone to help in New Orleans and what we could have done.  More importantly, it galvanized us to take a look at our own community to see what differences we could make closer to home.  Kevin Wohler, FilmGuru.net

AN AMERICAN OPERA is set to a soundtrack of rock, punk and folk songs, creating a seamless marriage between the lyrics, music and the events on screen...fast and tight...this film is a must-see factual grounding.”  Darren Schwindaman, Jackson Free Press

“...a tribute, and an honest  inquiry, into the human-animal relationship and how delicate
that bond really is...  AN AMERICAN OPERA takes us right into the middle of things and doesn’t let us look away...”  Sarah Ledbetter, WKNO Radio

“An American Opera” is compelling and informative and because it was not an agenda, not sensational, but just what happened when a guy with a camera decided to document the struggles and try to get to some answers… I give it 9.0 out of 10 … a film that pet lovers will cherish and everyone can be proud of.   I understand why it has won awards at so many film festivals… and it deserves to win more!!  Aaron Lafferty Wood8 TV
Buy Now